We went to a koala hospital!

Of fur and feathers We went to a koala hospital!

We were gently approaching Sydney during our 1st road trip in Australia when we made a stop in a New South Wales city called Port Macquarie (but if you want to sound australian, you can just say ‘Port’!). Our Lonely Planet was mentionning a so-called koala hospital. We didn’t really know what to expect but we definititely had to go and see it. After all, you never pass on an occasion to see koalas! 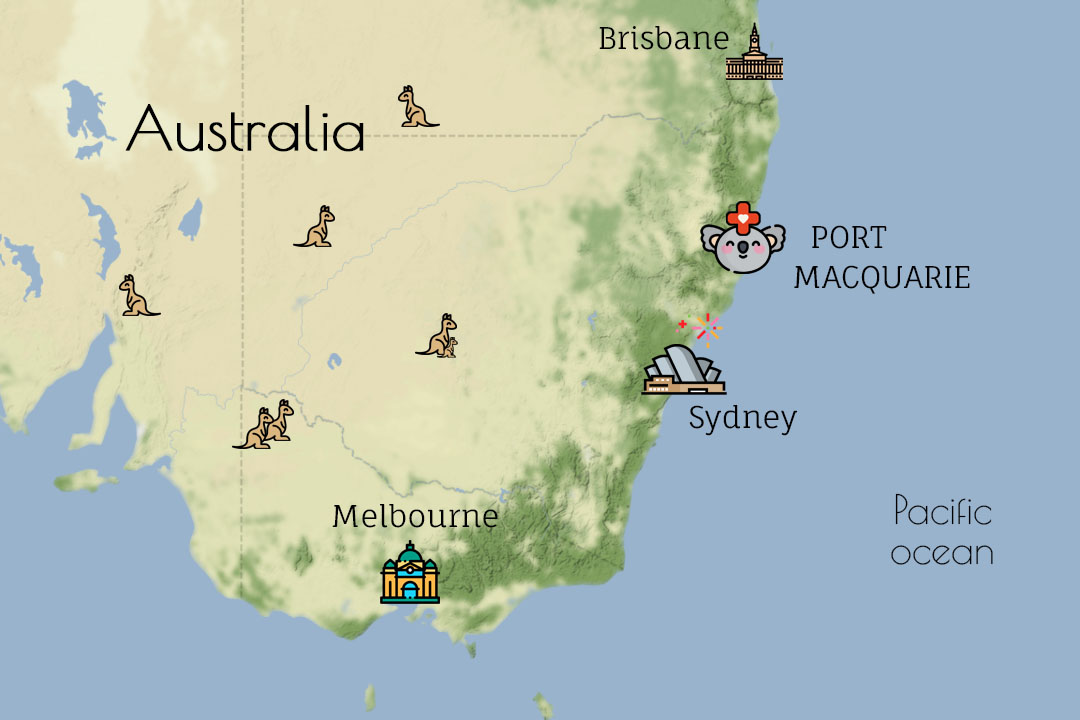 The need for an hospital

Every year, the hospital saves up to 300 koalas. Poor little critters are often attacked by dogs, victims of car crashes or even hurt during forest fires. Joeys (babies) are regularly separated from their mothers. And a lot of koalas suffer from a disease called Chlamydia which affect their eyesight and slowly turn them blind.

But someone who was apparently found of koalas had a good idea in the 70s: creating an hospital dedicated to those furry balls. It is a non-profit organization which is mainly run by volunteers. Koalas are taken in, given treatment and then released into the wild when possible. However, koalas from different regions are genetically different and they don’t feed on the same eucalyptus species (!). It is therefore important to always bring them back where they were found. In order to remember their origin, each koala gets a two part name on arrival at the hospital. The first part is the name of its area of origin and the second part is a first name chosen by the person who found/brought it. 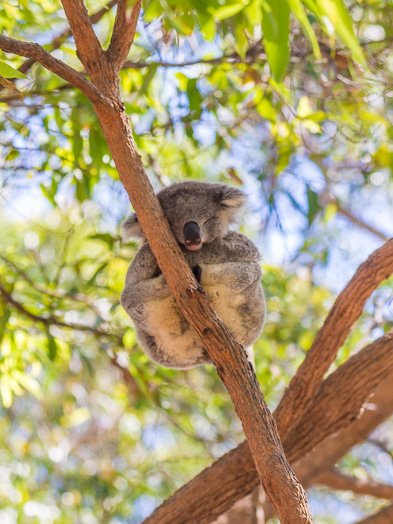 The hospital itself is made both of treatment rooms and outdoors enclosures where you can find the koala firmly holding to their eucalyptus trees! You can freely roam in the outdoors part of the hospital but you can also enjoy a free guided tour by one of the volunteers. This is how you will learn more about each koala and what happened to it.

This is how we met Westhaven Barry who’s suffering from scoliosis and Oxley Kaylee, aka tripod. Poor little female is a true survivor. She was first found sitting on a road with her baby. She had been hit by a car and had to have one of her legs amputated (hence the nickname!). But it seemed no to be enough for her because she then fell from the top of a tree during a storm. That’s when she became one-eyed… Their was also a very active young koala. This is so rare that we can’t resist showing you its pictures! 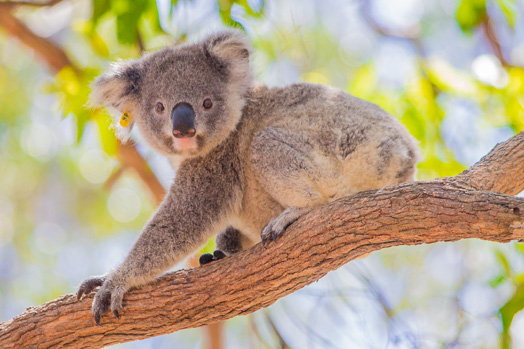 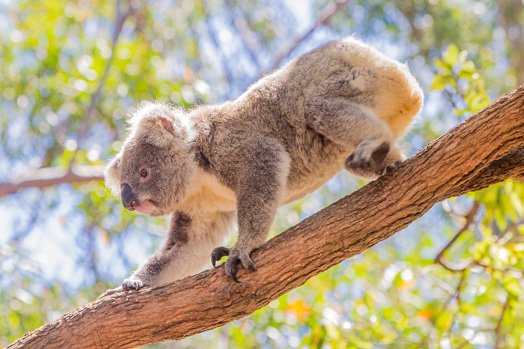 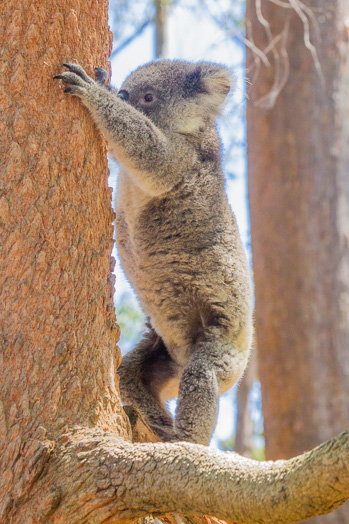 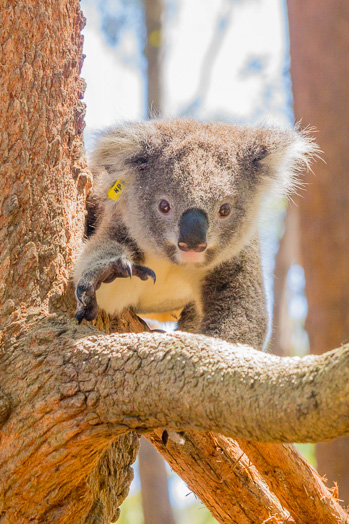 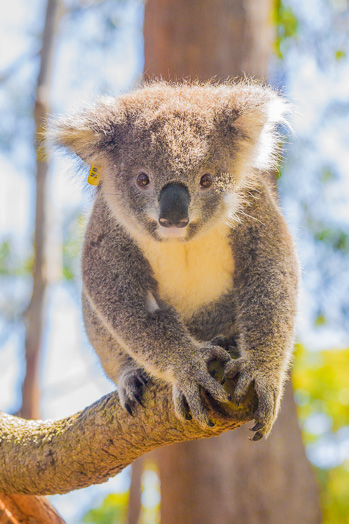 But as you know, it is always a good idea to save the best for last. When approaching the last enclosure, our guide cried out: “And now let’s meet Xavier. He’s one of my favorite, I looooooooove Xavier!!“. And I must admit Xavier was the best looking koala I’ve ever seen! So he became my favorite too. Xavier actually comes from a mountainous area called Barrington Tops. So guess what his full name is… Yes, Barrington Xavier! Since it’s colder in the mountains, this koala has a thicker fur (no he’s not fat!). And what does he like to do? Eating and sleeping, just like every other koala.
When he first arrived at the hospital, he was partly blind due to the disease I already mentionned earlier: chlamydia. He will therefore most likely spend the rest of his life being cared of at the koala hospital. 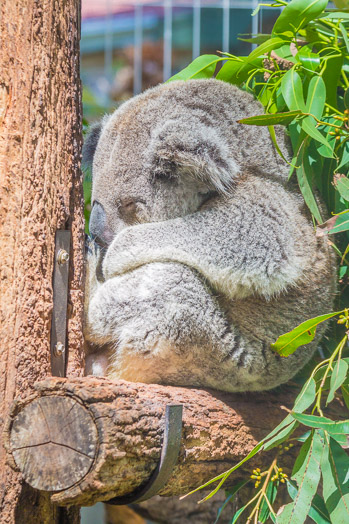 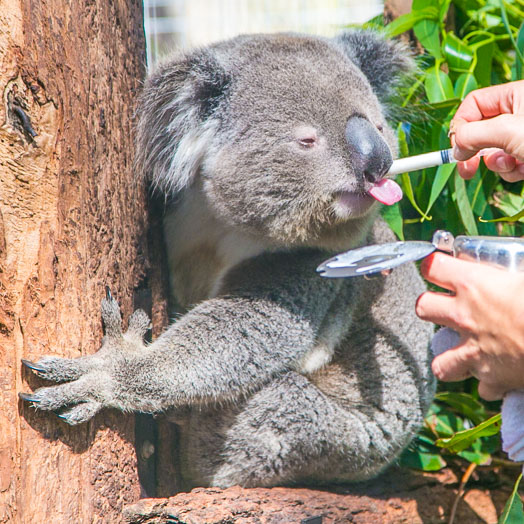 Opening hours: everyday from 8am to 4:30pm with a guided tour at 3pm.
Entrance fee: totally free! So don’t hesitate to buy a little a souvenir to help. 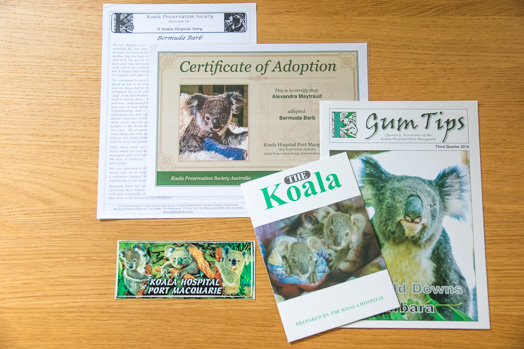 If you want to help this organization, you can adopt a koala for a year. What is this all about? Unfortunately, you won’t be able to bring a koala back home!  You can choose a koala among all those who are or have been resident in the hospital.  For a small fee you receive a certificate of adoption, the story of your adopted koala and the last issue of Gum Tips which is a newspaper written by the hospital.

We chose Bermuda Barb because, with its little cast, you really can’t get cuter than that (but please don’t tell Xavier!). And you, which one would you choose?

When we stayed in ‘Port’, the town was running an art project called Hello Koalas sculpture trail. 50 sculptures of koalas, each unique and hand painted by different artists, were disseminated in town. With the help of a map, we can try and find them all! We couldn’t resist and tried to photograph as much as possible. Here are the ones we found: 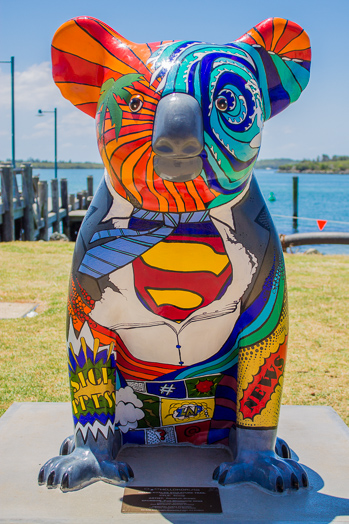 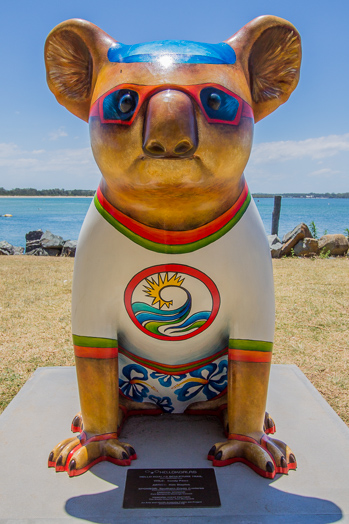 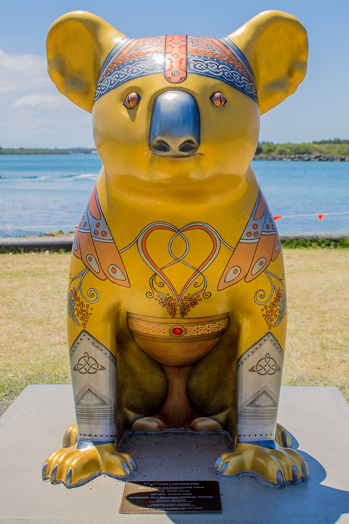 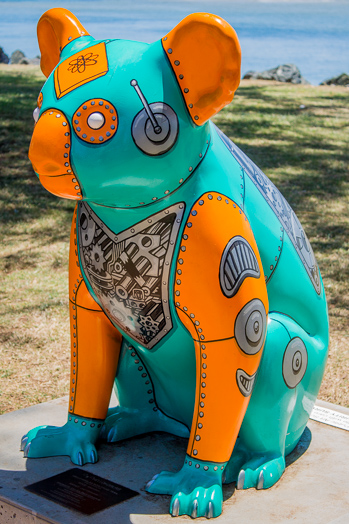 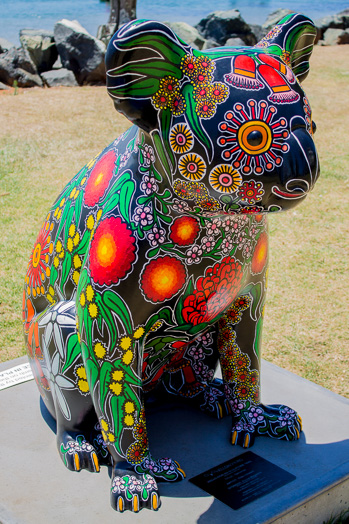 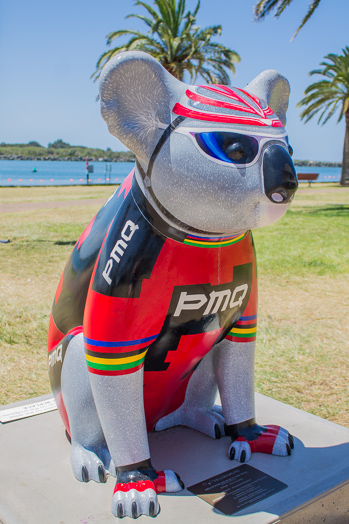 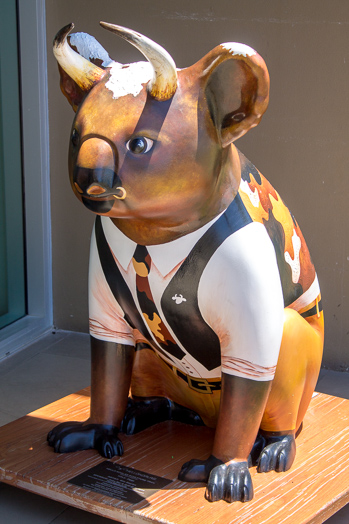 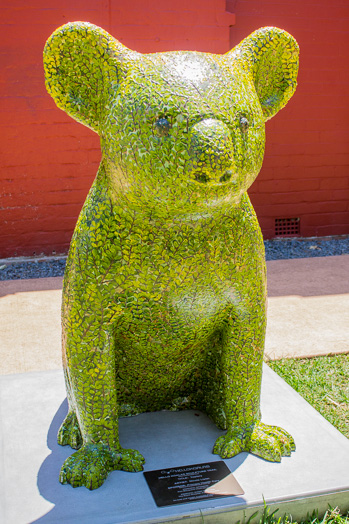 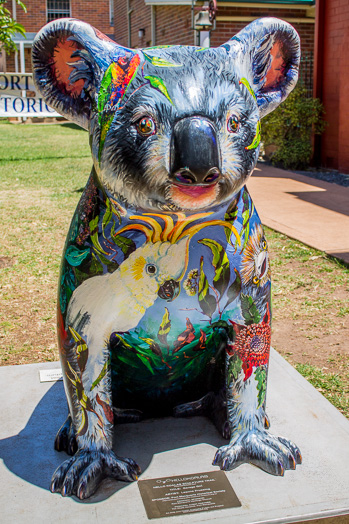 Our quest even lead to enter shops just to take a picture and then leave… I can still see the face of the guy at KFC who was hoping he was finally getting a customer! 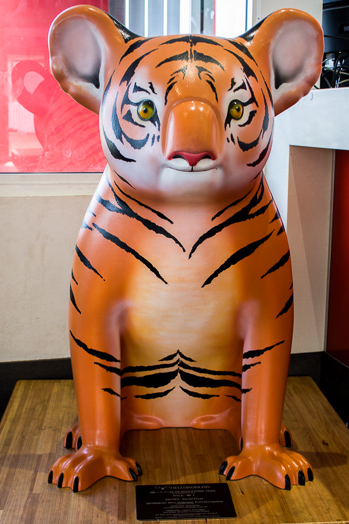 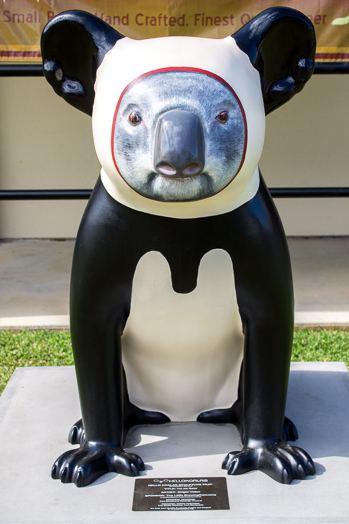 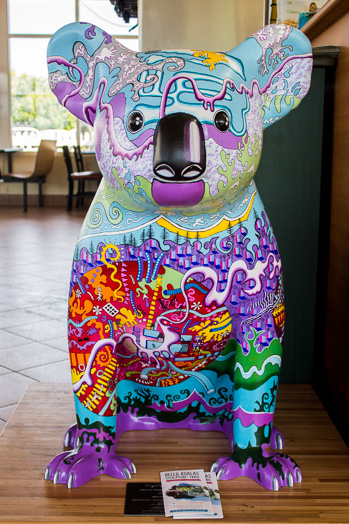 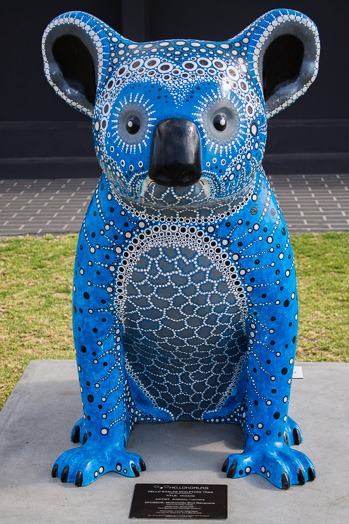 Those two were at the koala hospital

But my favorite is this one 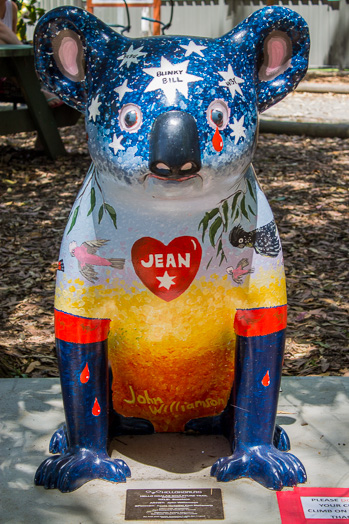 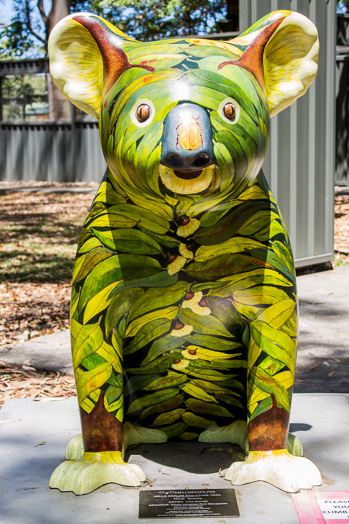 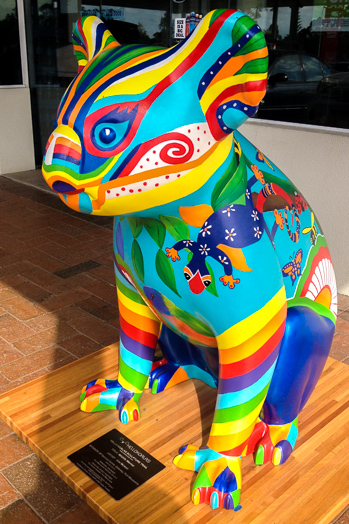 Other visitors gave it the following rating: [wp-review]